Get TESOL and Teach English. TESOL is your Ticket to Travel!

We are now experts on India having spent a few days in Delhi and a few days in Agra. Everyone instantly recognizes the Taj Mahal from the images and postcards etc that abound. However they neither do full justice to the beauty and craftsmanship nor prepare you for the absolutely overwhelming feelings on seeing it in the marble flesh. The initial sight of the Taj takes your breath away and as you get closer, despite the crowds there is nothing to dispel that initial reaction. This is true man made beauty, almost indescribable. The marble is translucent and so takes on the hues around it, apparently even more beautiful at sunset and sunrise as well as full moon. We have chosen not to go another time as the weather is quite temperamental and it is just as likely with the fog that a second time would be wasted. Our guide informed us that it took 22 years to build using 1000 elephants to bring the marble from the quarry which is at Makrana village some 325 Kilometres away where marble is still being extracted. The black onyx came from Belgium and the other precious stones from other countries in the region. The carvers had an easier job at the Red Fort, another sight of enormous beauty and skill. The red stone is much easier to work as it is sandstone whereas the marble is a very dense material. It is mind blowing to think that various designers, architects, engineers and craftspeople worked together without the benefit of modern technology to produce these amazing edifices whilst Europe had not progressed much beyond stone castles. The imagination to start with and then the expertise to execute the design of these buildings is unbelievable. The evidence is there. The skills that were evidenced on these glorious buildings into reality are almost indescribable. 20,000 workers employed and apparently no strikes [!] nor accidental deaths or mishaps is the Occupation Health and Safety record we were given for the Taj. There is care in each piece, there is enormous symmetry and accuracy throughout the building and someone worked out must how much of each material was needed for the inlaid features as well as the actual large pieces. We have greatly benefited from a fantastic guide. Dr. Ashish runs a hospital and nuropathetic practice 6 months of the year and works as a tour guide the other 6 months, it gives his life balance. He has a degree in history and a wonderful sense of humour. Apart from being very knowledgeable I think he enjoys our many questions, eg well if all these people lived here where was the food prepared, where did they toilet, did they have eunuchs??? Now I know you really want to know the answers!! One of the queens was a very strict vegetarian so she had a separate kitchen( remind you of anything else? ) the toilets are at the outer wall, and yes they did have eunuchs, and we had quite a long discussion as to how they were eunuch zed—two bricks? An interesting conversation topic better left for the dinner table!! Or over port after dinner. 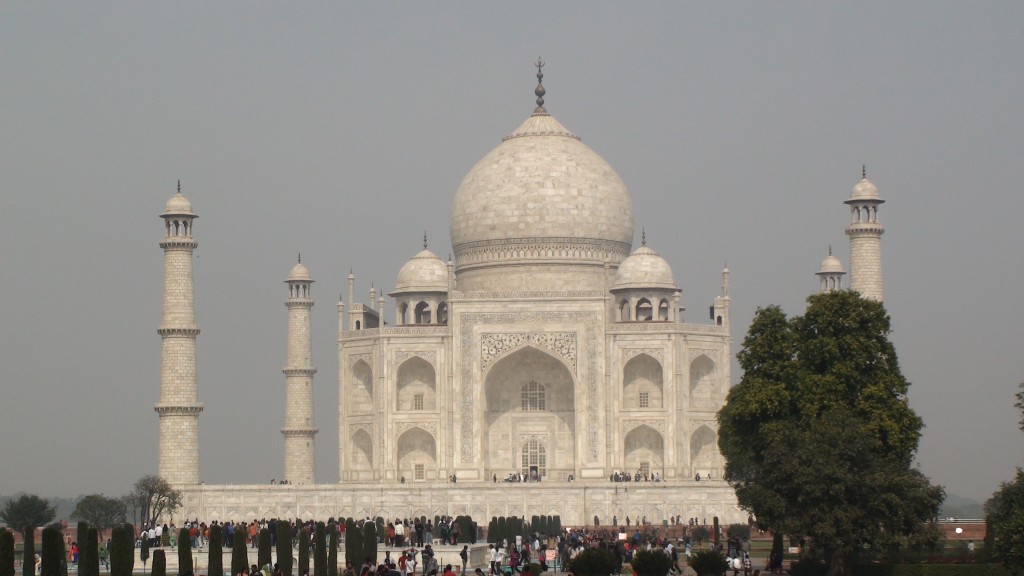 Agra is far more Agracultural ( spelling deliberate) than Delhi. So there are signs of the agricultural side of life wherever one looks. The roads are shared with Brahma cattle and buffaloes, herds of donkeys wandering at will, working camels majestically and in their own time sharing the roads with other vehicles and on the toll road a flock of sheep passed through free of charge! Cow and buff pats are mixed into a paste and then shaped into a round flat, dried and baked in the sun, stored under straw and sold by weight to be used for fuel. Women and men go daily to the markets for their food shopping, and the stalls are enticing. This is a major potato growing area, the spuds produced are a very regular small round shaped and they appear at almost every meal. If we were very truthful the diet over the past several weeks of rice, mixed veg, daal and potato curry is getting boring. We are both dreaming of steak or lamb roast with a great deal of pleasure. Whilst we were at the home stay, our host attended a family wedding and we were invited too. A large wedding, about 1000 people, who came and went over the evening. Buffet style food with stunning deserts that I the non sweet eater greatly enjoyed. Hindu marriages are often still arranged, after initial photographs are exchanged there is only one meeting of the betrothed couple before their wedding day. Sounds very scary to me. Everyone at this wedding was very friendly, eager to try out any language they could on us and by the end of the evening we were surrounded by a tribe of very charming children either shy and bashful or full of their ability to communicate and interpret. All the married women wore exquisite saris sparkly and glitzy, the young girls similar in frocks and leggings. Only married women wear the sari. Whilst there were many young men hanging around, young women were not in evidence probably being kept at home and away from the influence of young testosterone filled men! We did not stay for the ceremony itself as that was not due till the wee hours of the morning. As we drive around the many sights we get glimpses of ordinary every day village life. We see people pumping water from wells, men waiting in large groups at the Indian version of an employment bureau. Both young and old men cycling unbelievable loads in rickshaws and tuk tuks crammed with anything up to 9 people and their shopping. Trees are numbered in yellow paint and they are girdled with red, white or orange, whitewash mixed with insecticide, all to ensure that a)the trees were not bothered by insects and b) that people didn’t steal the wood. There are some children running around like the tinkers and gypsies of my earlier days, unkempt and with the constant hand out asking for money. There are young males truanting playing cricket and not a few teenage couples stealing some private moments. Throughout our visit to the many beautiful buildings of Agra Ashish kept talking about ” the ladies of the harem”. Each time he mentioned them that song of Rolf Harris’ came to mind and I tried to keep a straight face! Luckily I don’t know any of the other words, although H did offer to teach them to me!! It was quite obvious that in the 16th century the life of a lady of the harem was quite a privileged life style. We have greatly enjoyed Agra, our host Monty is part of a rather large organization, probably the regional manager and has his fingers in many pies. So last night we saw a Bollywood performance of the love story behind the Taj Mahal. Naturally it had all the elements of Bollywood, loud, dramatic, stunning costumes and loads of bling!! We also spent time looking at the marble carvers at their inlay work–visit us in 6 months time and go ooh and ah over our new kitchen bench. And we visited a goldwork embroidery workshop, Zadozie work – enthralling to a stitcher such as HB. But along with all this there is much life below the poverty line. It is not romantic to catch these glimpses of everyday life and there are huge unanswered questions. What will happen when India becomes more mechanized and technology takes over the menial lives? How much longer will the current generations stick to the traditional ways of their parents and grandparents? As the caste system breaks down how will this impact on everyday lives? What about diseases from unsanitary living? When will there be education for every child? Yes, India is a developing country with a major population [1.24 billion] how quickly can it develop without leaving thousands of people behind? How can we, with all we possess not give money / food to the begging children. To them we must look like princes, with our cameras, our clean clothing, our shoes and our ability to travel. Australia with its- by comparison, beautiful clean towns and cities, its clean air, its luxuries and it’s shops and shopping mentality seems a very great distance away. Now on the train to Jaipur which should have arrived in Jaipur a few hours ago! It has been a long and dreary journey, starting at 5 am! 6 hours of sitting on a train covering a distance of 120 miles or 224 kilometres.

This evening we meet our employer for the next few days. Then we travel on again. TTTT The Travelling TESOL Teachers

A TESOL Teacher in China (part 1 )